This year again, the CRT of Alsace has renewed its trust in me by requesting a new short movie still based on the theme of Christmas and Alsatian legends surrounding the event.

I made some concept arts for the main plot of the film without knowing what was going to be the scenario. From there, the scenario was written at the same time as the storyboard. Once this step has been validated by the client, I was able to get into the big part of the project work: modeling characters and environments.
Je suis parti sur quelques concepts arts pour la trame principale du film sans savoir ce qu’allait être le scénario. A partir de là, ce dernier à été écrit en même temps que le storyboard. Une fois que cette étape a été validée par le client, j’ai pu me lancer dans le plus gros du travail du projet: la modélisation des personnages et des décors. 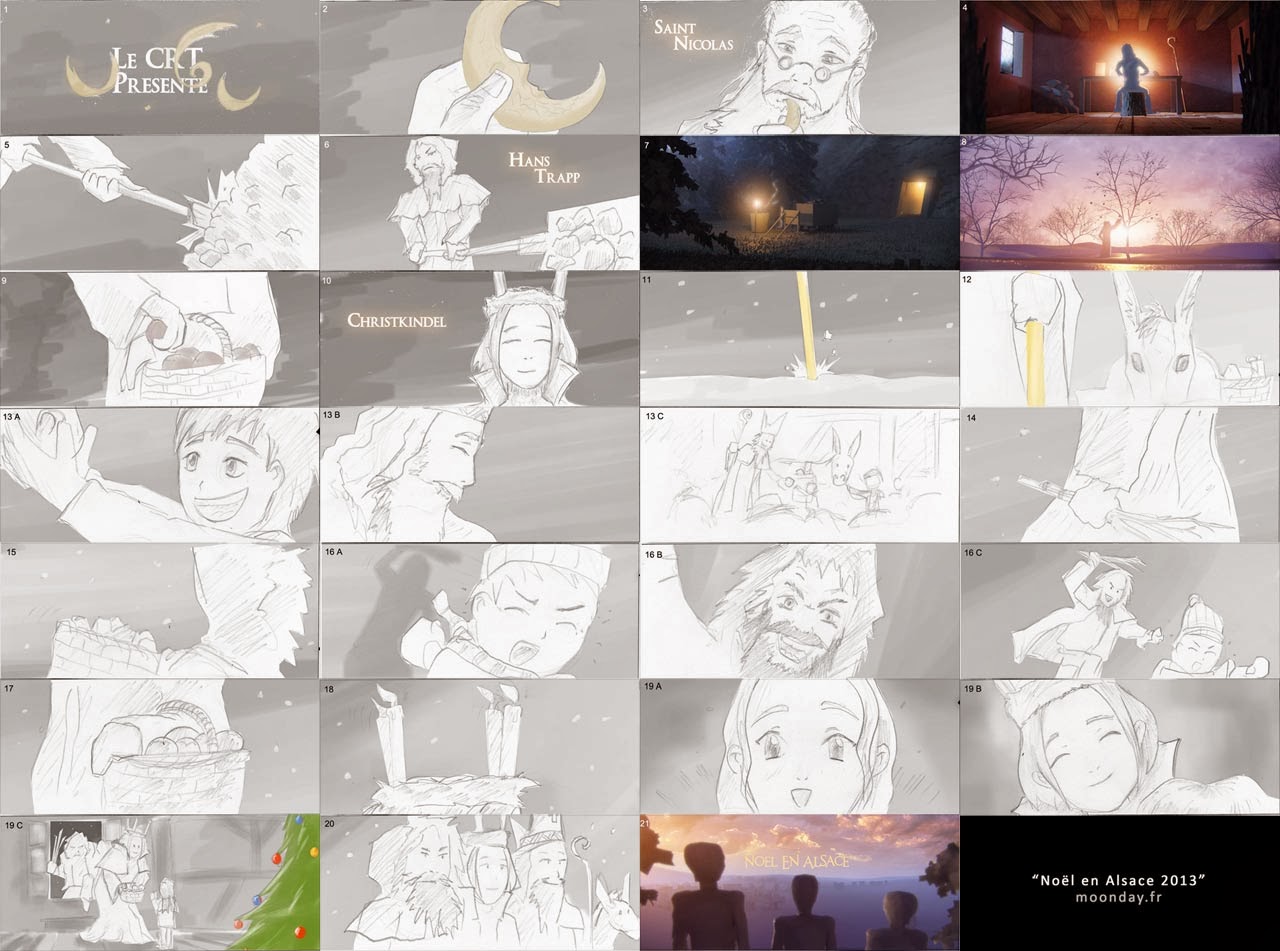 The characters were the same of those from last year project with a facelift, because this year they appeared more often on the screen. Detail work was particularly brought to clothes, the characters had to be printed on A3 format. The textures were hand painted using some Photoshop filters, Knald has once again been a great help to generate normal maps. 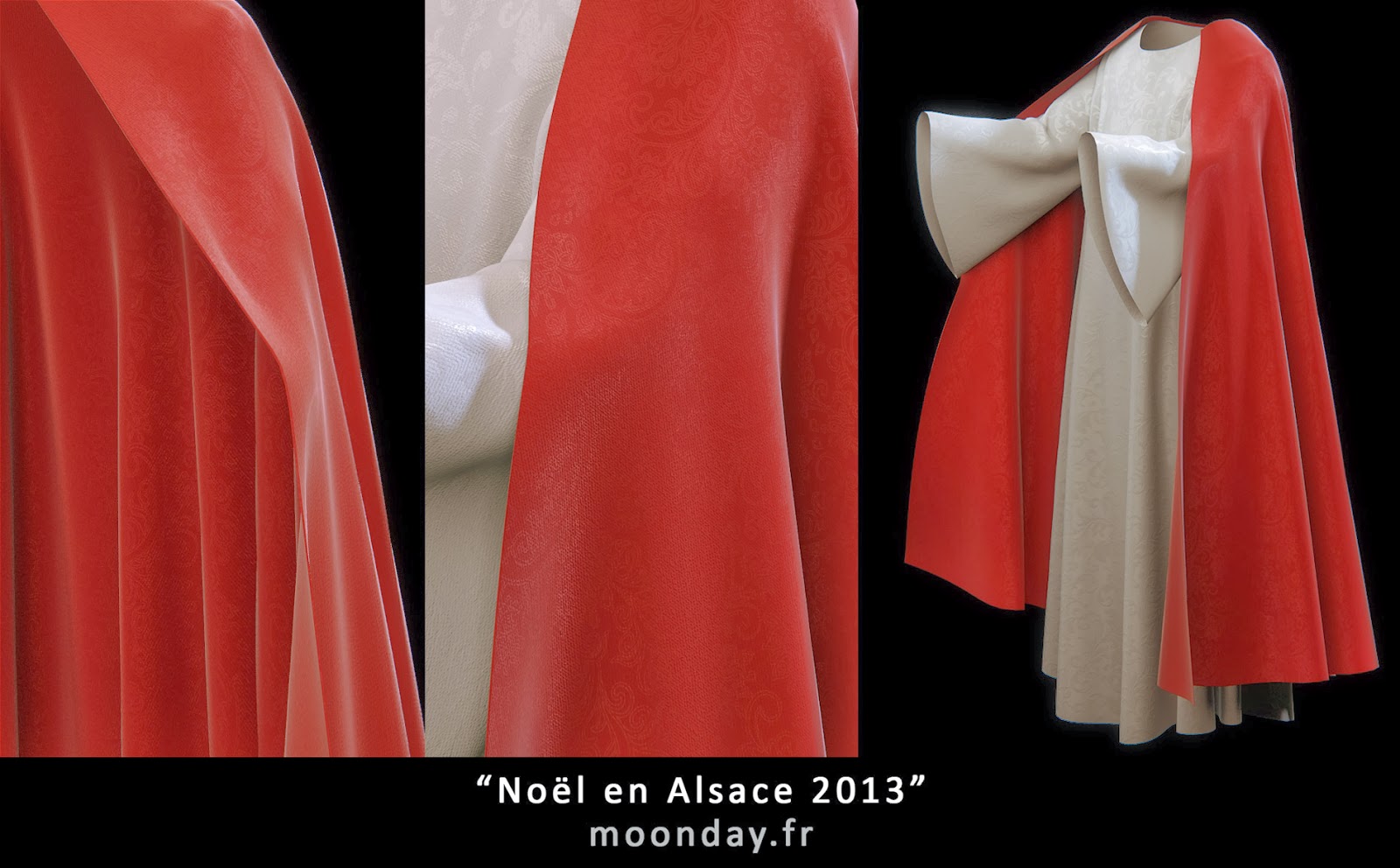 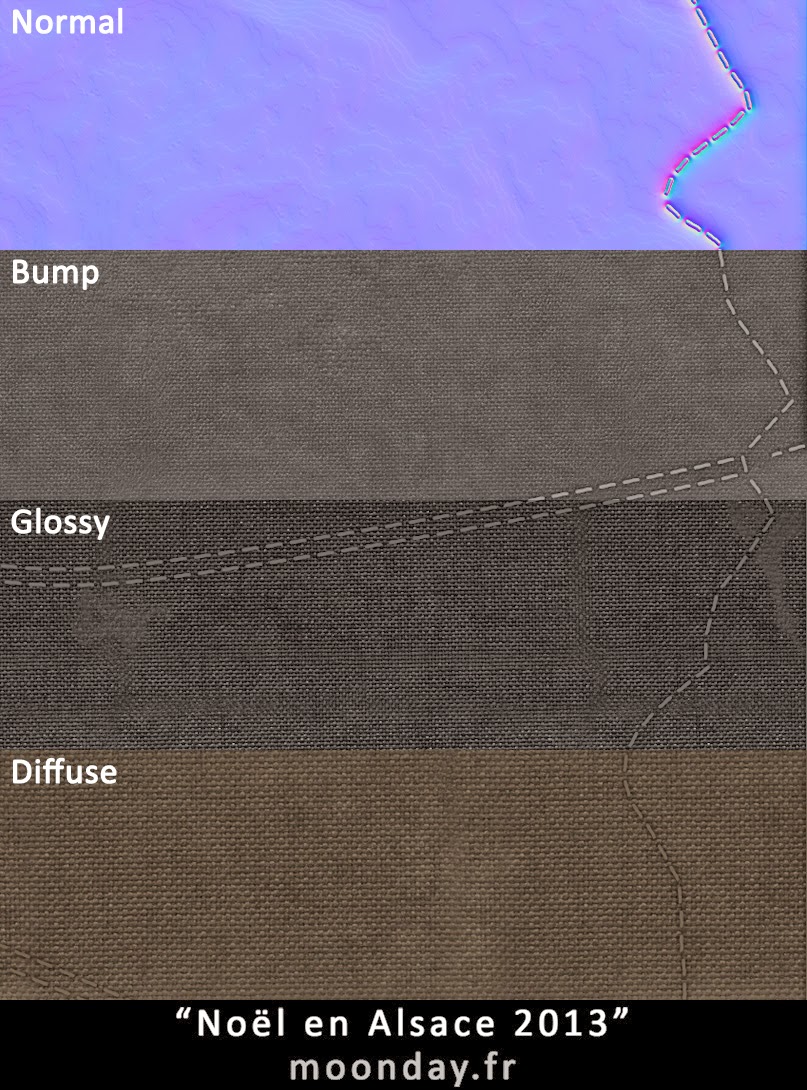 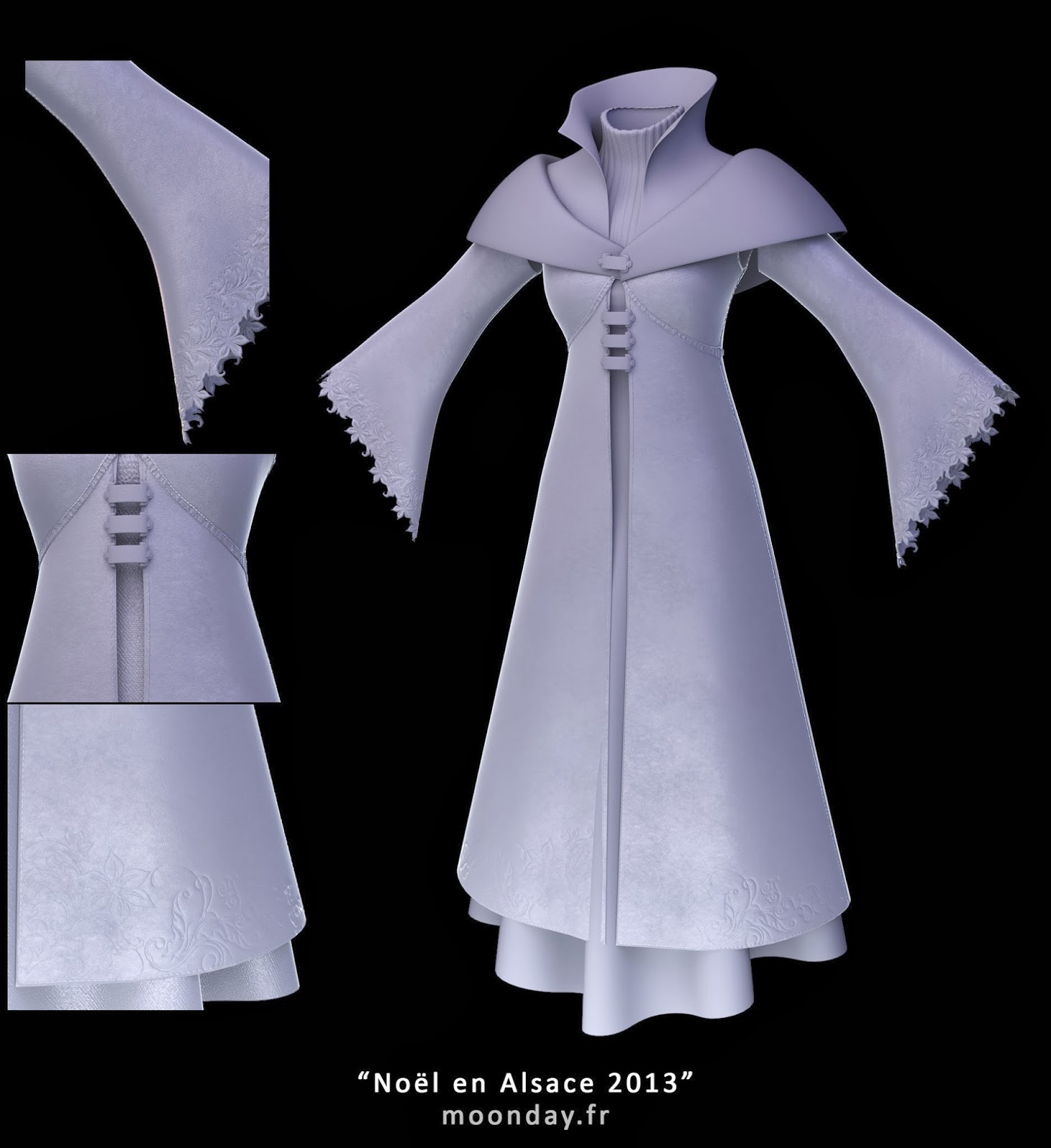 For some details such as the edge of the miter of St Nicolas, I created tileable 3D geometry and made ​​zdepth render of it then I modified the shape in Photoshop to follow the object UVs. The resulted map was then used as displacement.

The character of Christkindel was the one that has changed the most during the film’s production, even up to a well advanced stage of production, which forced me to make her short hair in order to complete the film in time. Her crown was created using GrowFX a High poly model for close-up and a lighter model where the thorns were only two polygons plans for far away from camera shots. 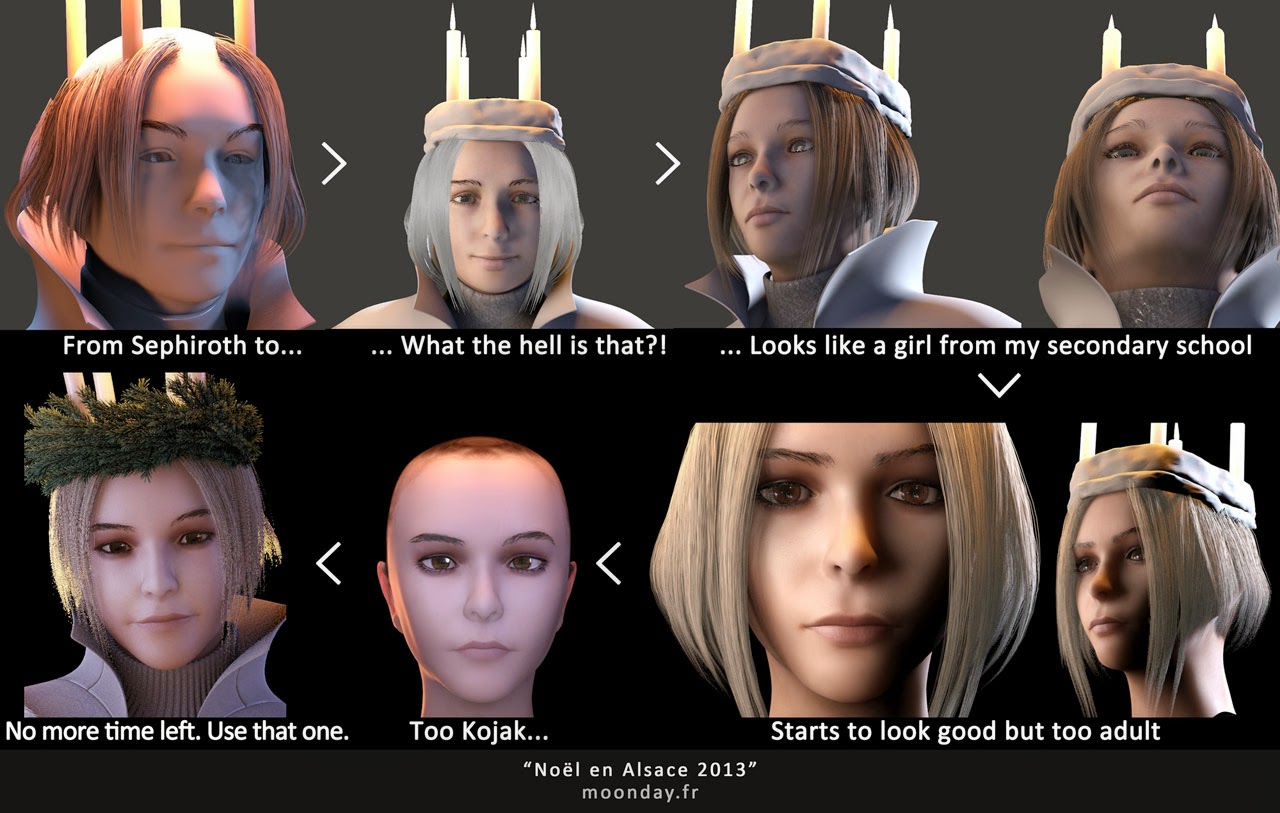 Should be in the pokedex with so many evolutions

At first I decided to use 3D scan for children models, I quickly changed my mind to a non-realistic style, lack of time and also because it was better suited to the mood of the movie. Always with a kinect and my platform scan, the bodies were scanned with ReconstructMe in multiscan mode. The scans were used as the basis, then the mesh was redesigned to get a less “uncanny valley” version. 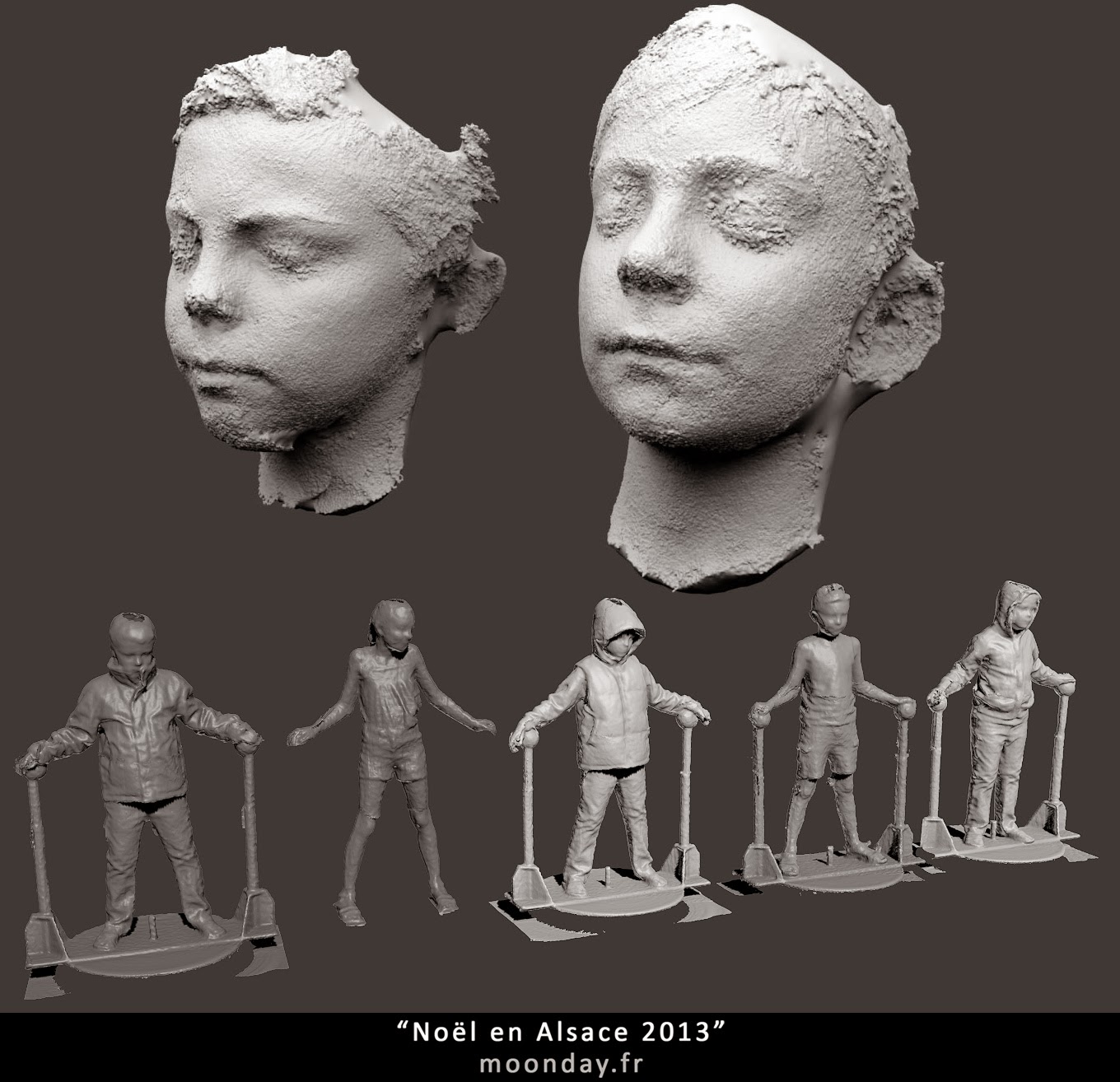 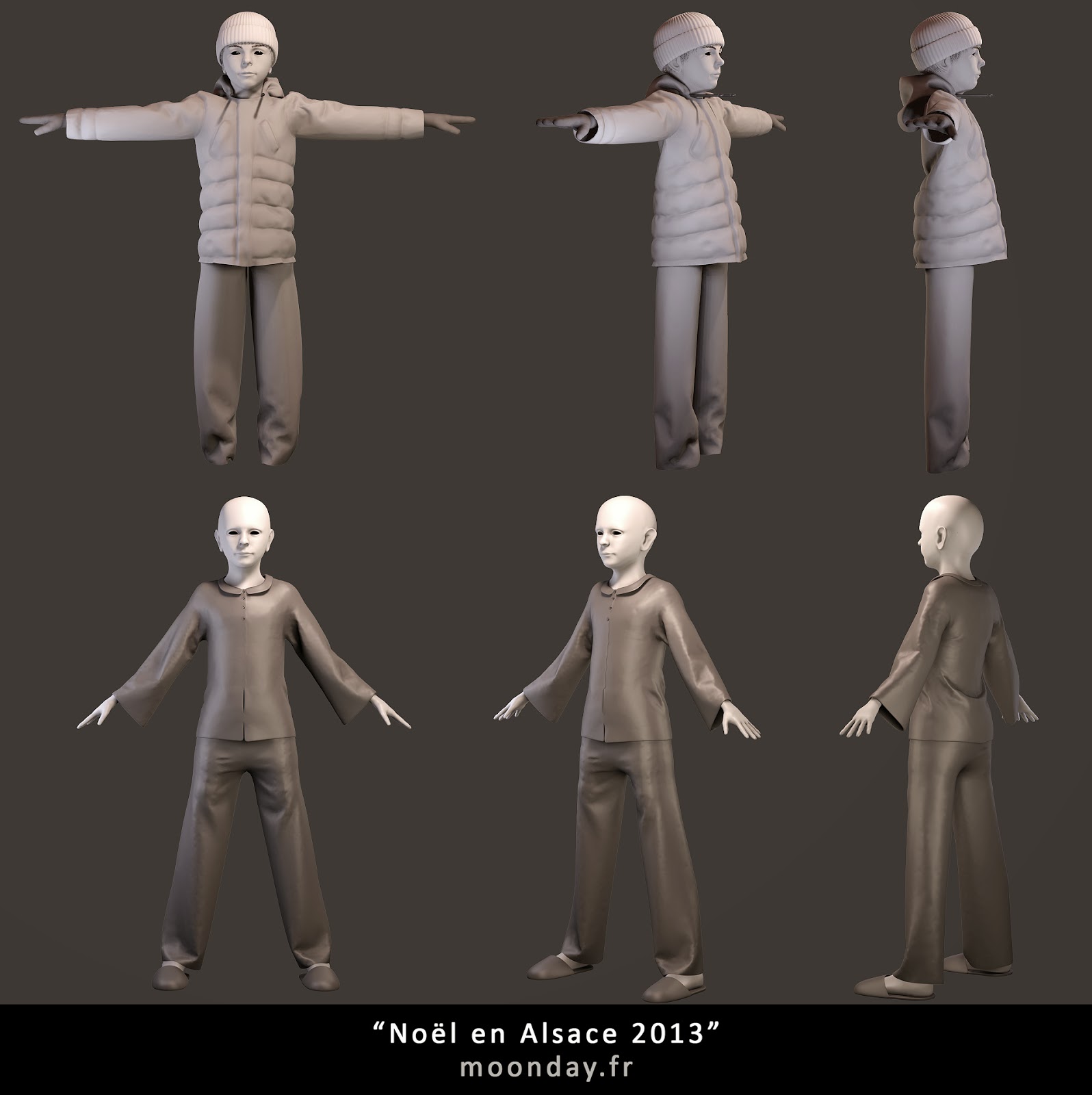 About the hair, it was THE nightmare of the film, so much so that I think to focus on the creation of robots or bald characters for a few months to get over it. Creating hair and fur in Hair Farm was easy, when came the rendering process, then the drama happened. I admit that it’s my fault, want to render the hair with Mental Ray, you must be unconscious. In the end I found workflow to render the scenes with little pain. You just have render your scene normally, with hair&fur invisible to the camera but still projecting their shadows on objects in the scene, then in a separate scene render hair&fur with scanline renderer. This method is cumbersome andit’s a waste of time, + problems come if some of your items have displacement (Max Scanline does not support the displacement the same way that MR does). However, even with this method it happened that Max had ​​random crash without knowing what the problem was (…) (Note to myself: go on Vray) 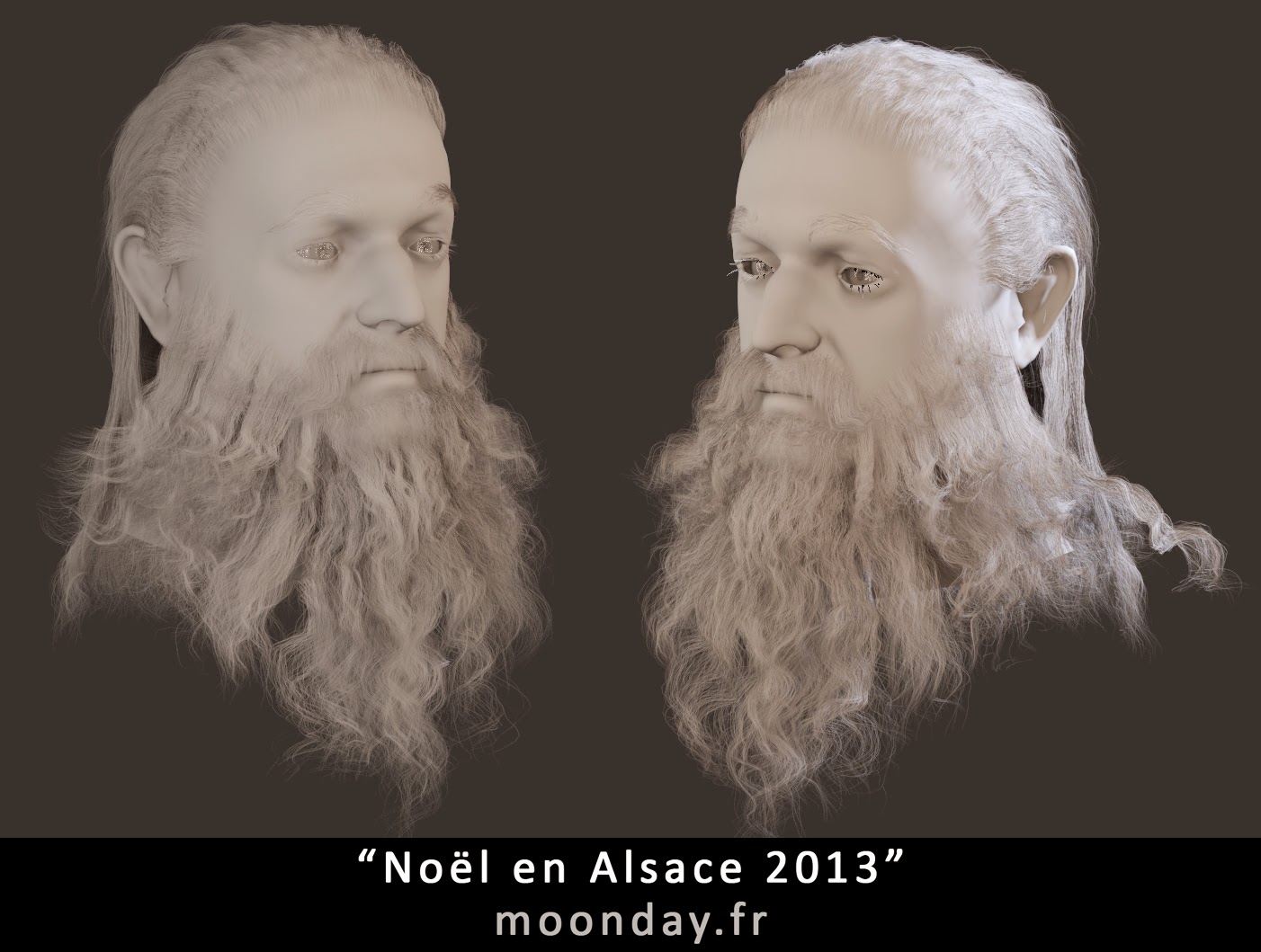 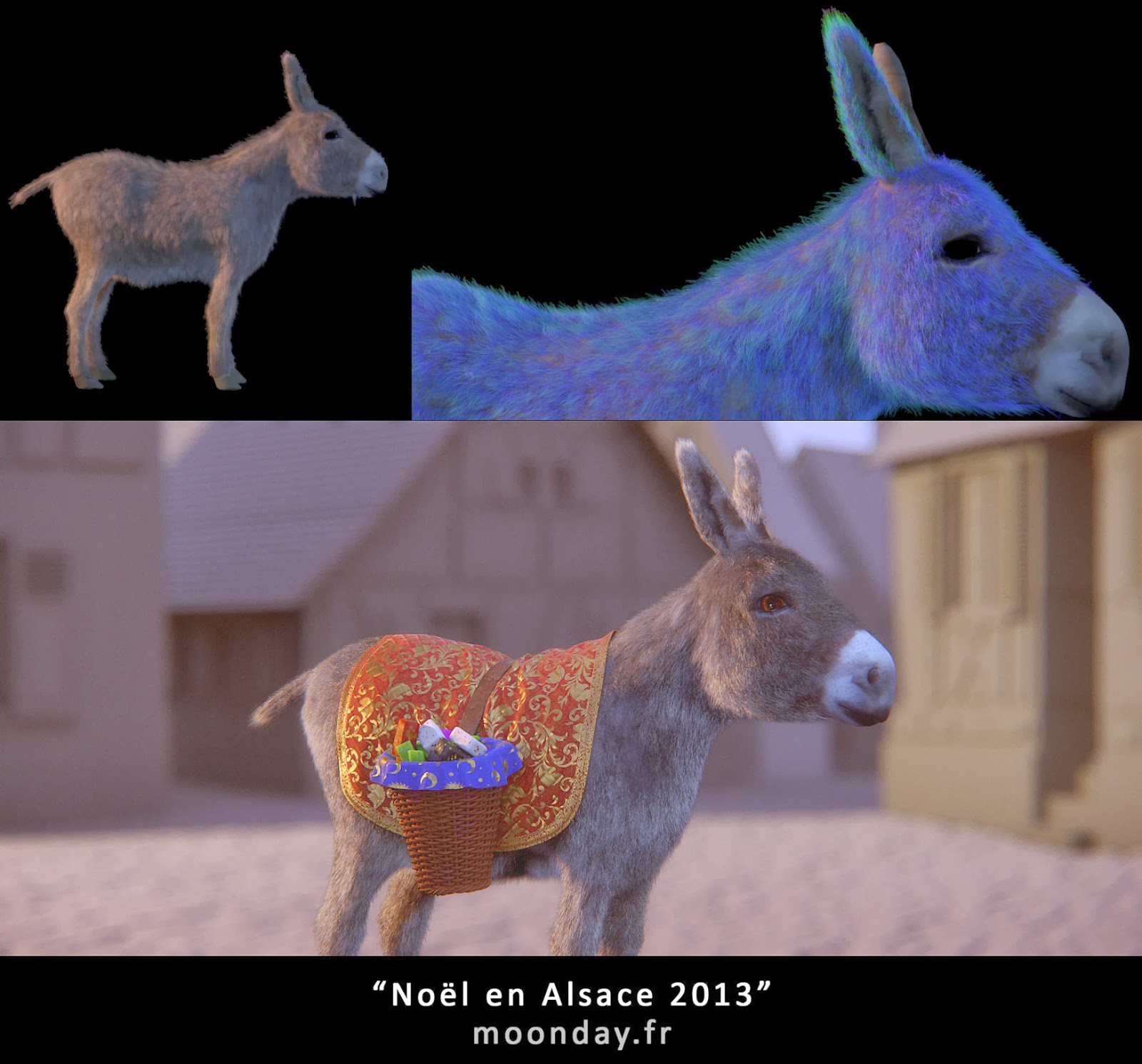 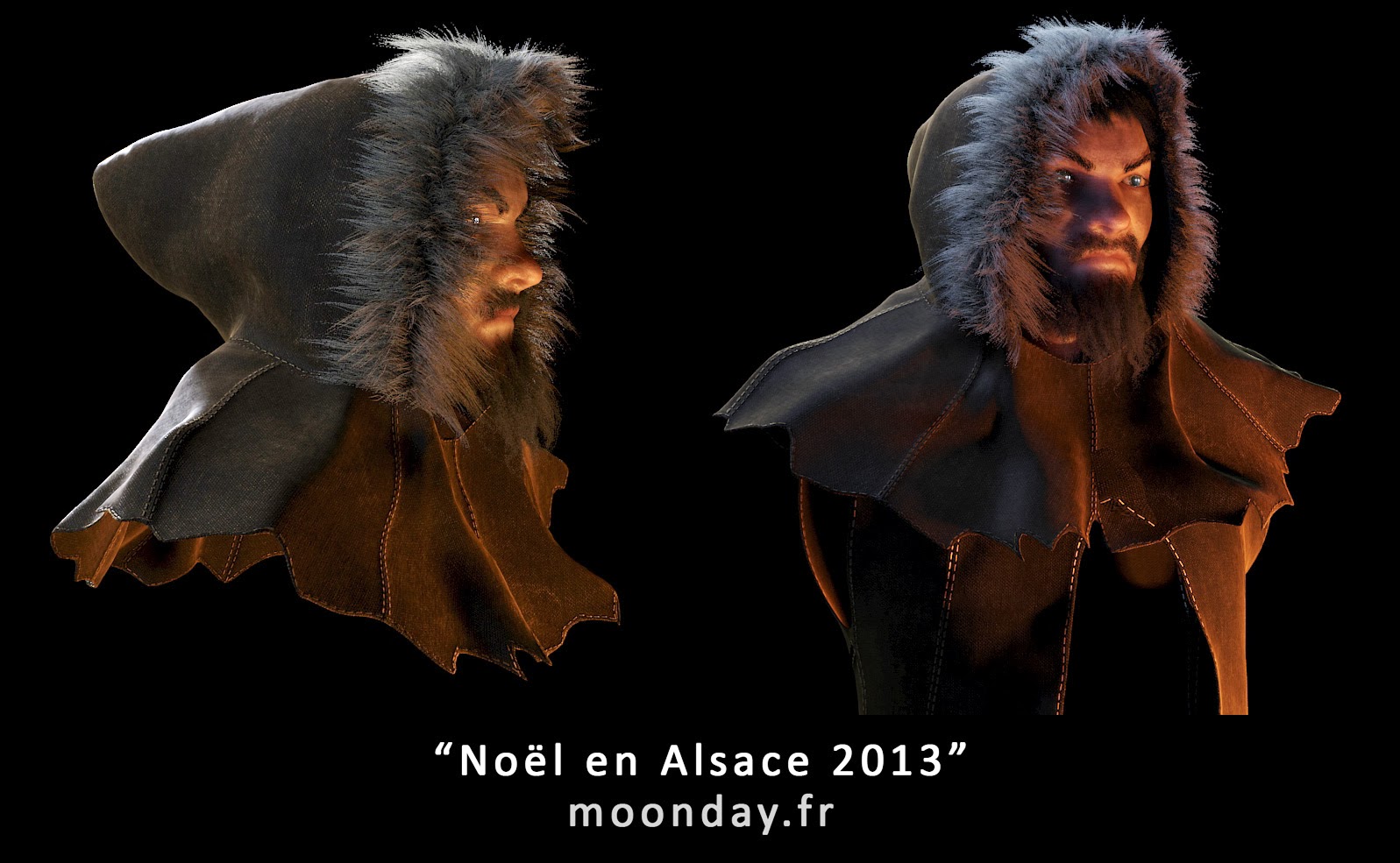 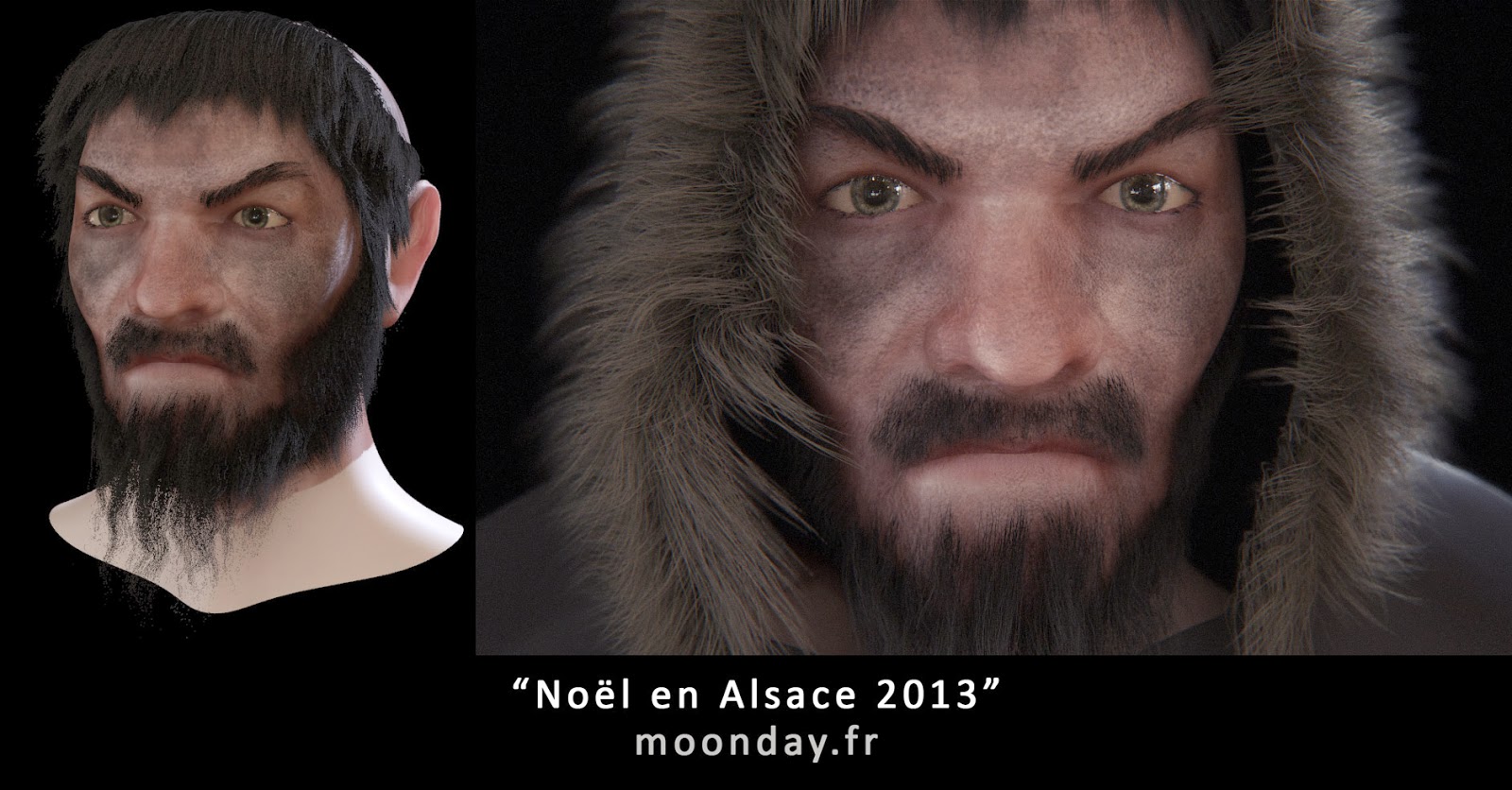 About hair animation, some white hair appeared on my skull… I used all solutions offered by Hair farm. Most of the time I its simulation system and close and when results weren’t good enough, I moved on cloth simulation with the hairmesh link option. And when nothing worked I opted for the solution of rolling into a ball crying under my desk.

Once again iPisoft helped me for character animation. One of the rig had issue using mocap data so I had to move on full keyframe animation for that one. The animation of the donkey walking in slow motion towards the camera is retrieved from another project I’m working in parallel. Captured from a very bucolic Movimento session.

My best role ever

This is a new thing for me, and this is the part that I liked most about the project (with the times when I went screaming in the field next to my house).

The white paradise is the first environement I worked on, here the light is the true character of the shot. It is also the easiest to achieve, a central island, then a circle around and a simple foreground. Trees from an Evermotion pack manually placed and then compositing for the sky and background trees.

Shaded view of the place and Snow shader tests

St Nicolas workshop has changed little since the original concept art, wooden beams have appeared on the wall opposite to the character and stars made of branches to fill the wall. For the floor I set out a reference taken during a visit to the museum of Alsace, unfortunately the camera angle in the final shot of the sequence does not give the best view of it. 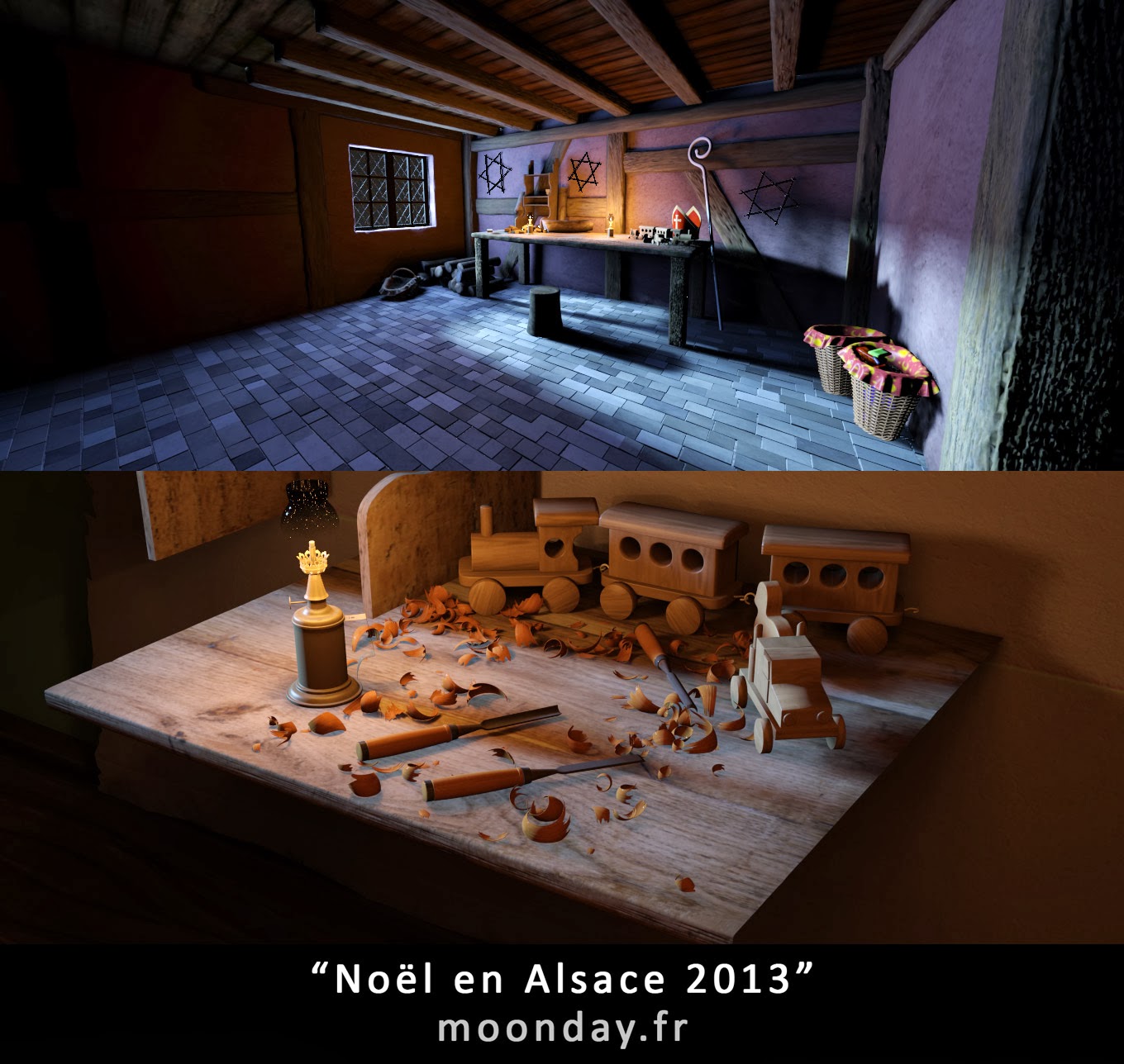 We live in a world full of cheaters

For the first shot of the film, wooden toys were quickly modeled from the references found on the web, all using the same textures, a huge timesaver. The lamp pigeon was modeled from the one that was lying in my kitchen, she finally has an utility ^^ 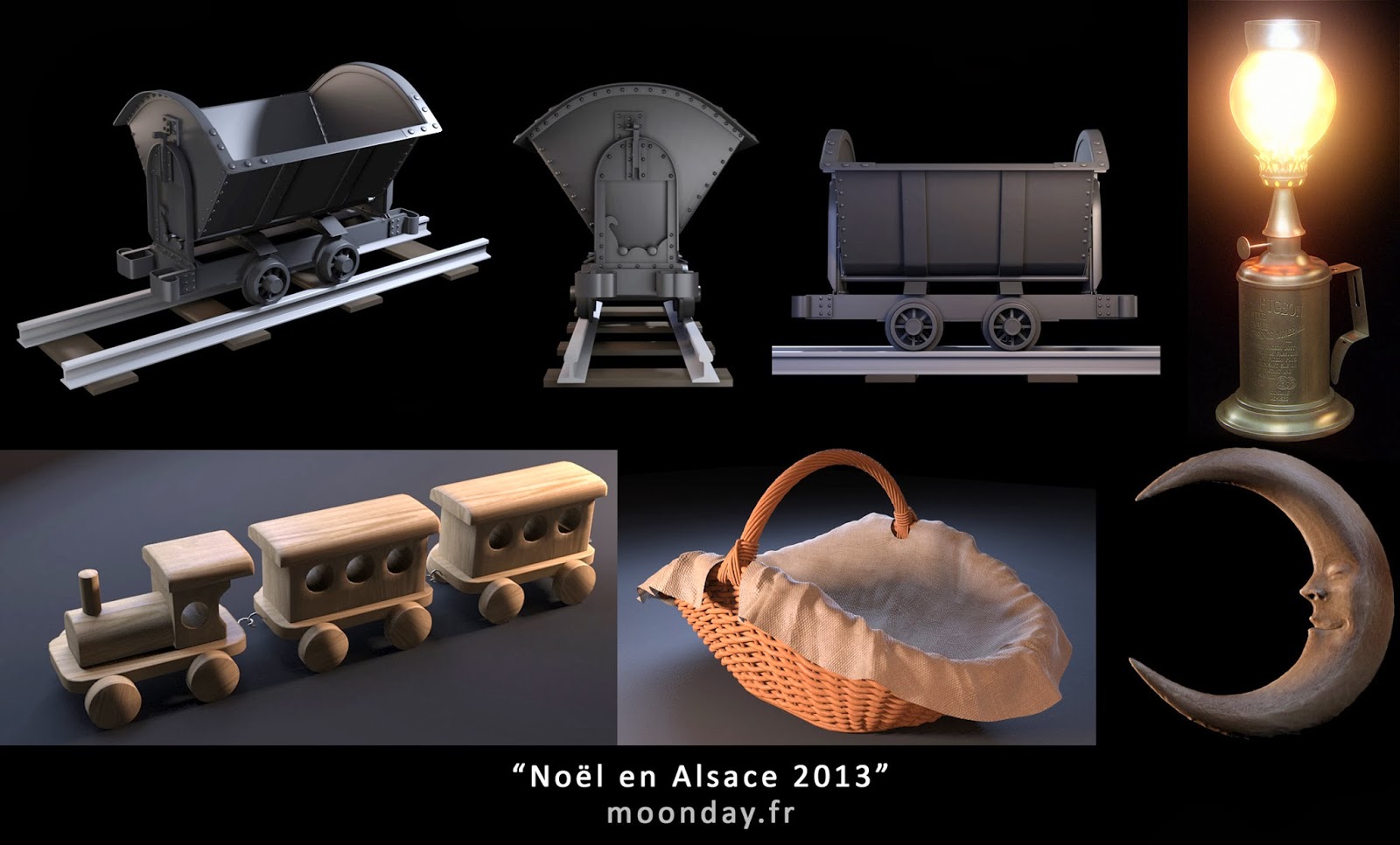 I wanted to avoid spending too much time modeling wood shavings so I opted for a procedural way.

Hans TrappMine is close  to the original concept art too. The ground and the rock wall are fairly simple surfaces with displacement maps from Gametextures.com. Coals were generated using Rock Generator MAXScript. 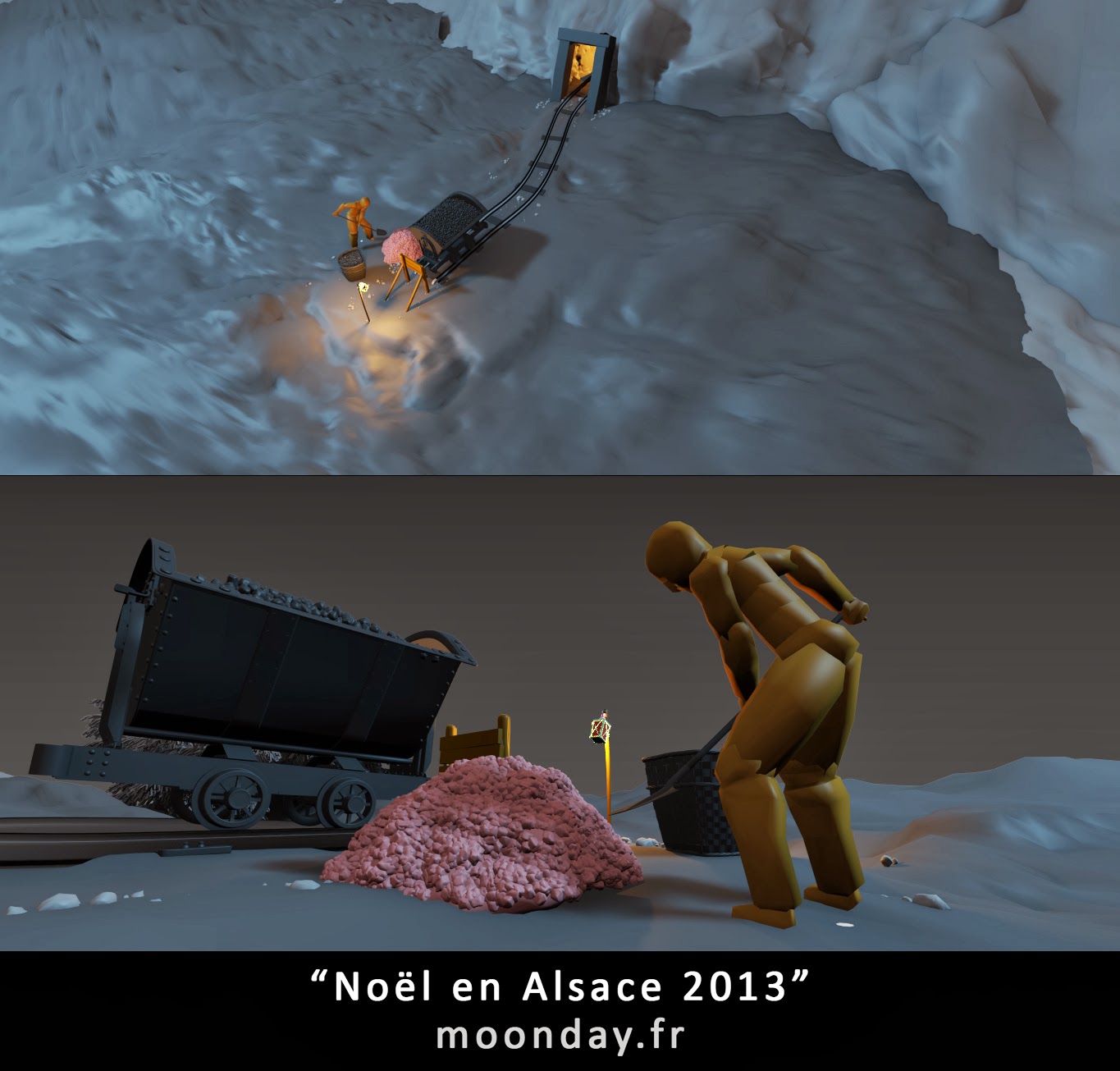 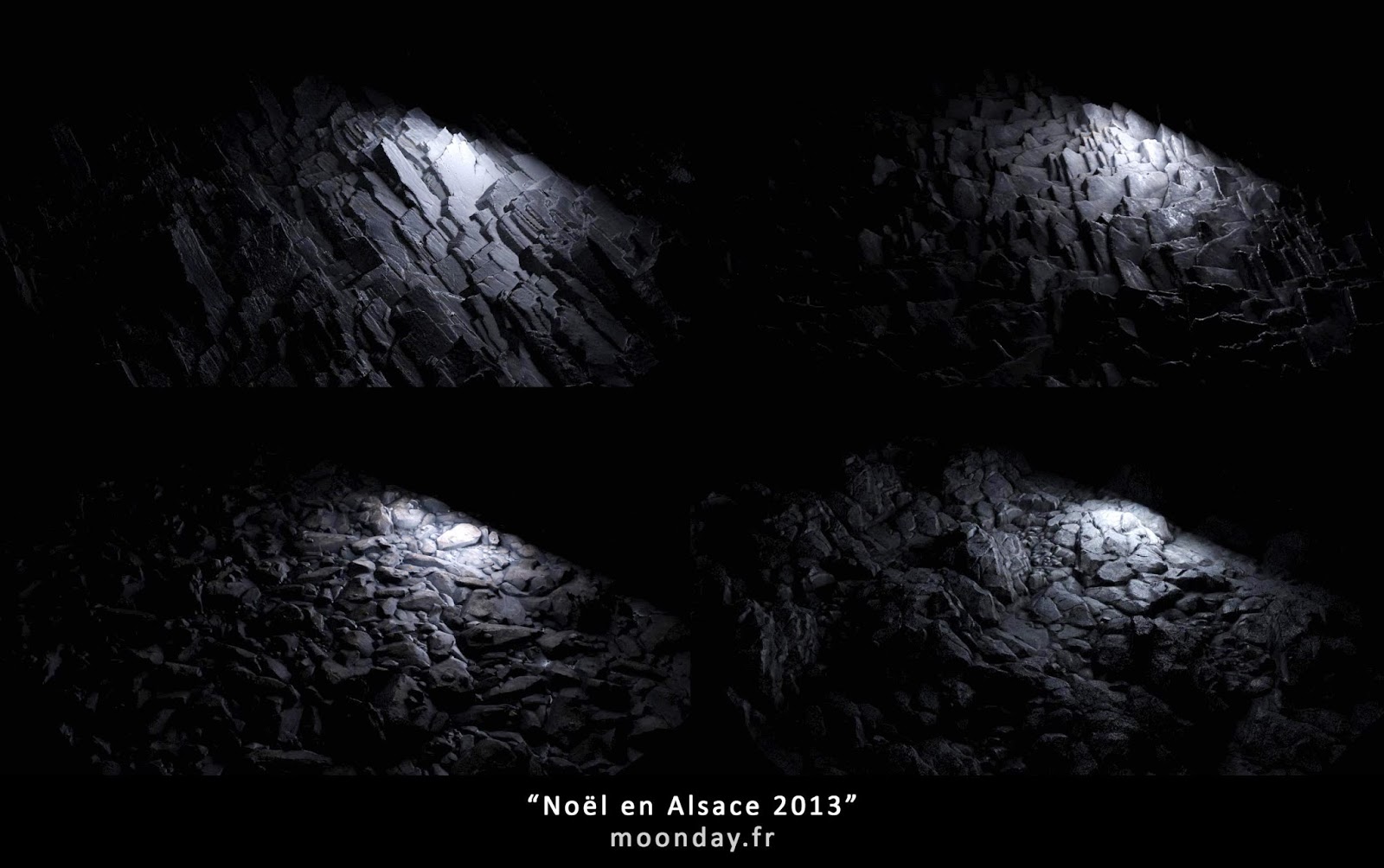 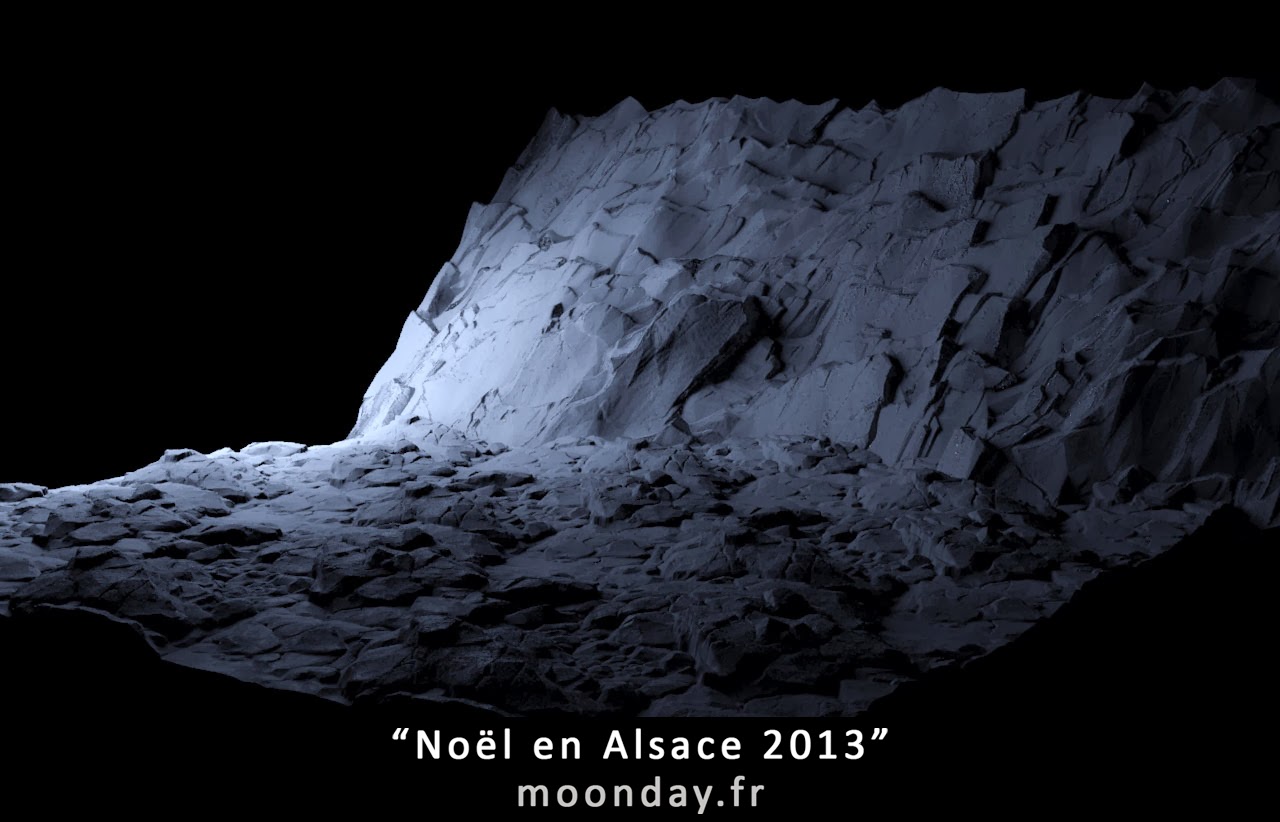 All shots in the snowy path are made from still images, the perspective was simulated by compositing. The snowflakes are from a 2D particle system. For the final shot of the movie, I was inspired by an old drawing to recreate an Alsatian lowland. Once the main volumes modelized, I went on the creation of villages. Based on maps, I painted roads and rivers in displacement maps, houses were placed on the scene through the Max paint system. Using the “follow stroke” option it was possible to orientate them to follow the roads. The houses are low poly models used on the project from last year.Trees, Mental Ray proxy, were also painted on the ground (around 24.000). It only remained to paint some details in displacement to make the soil less flat. 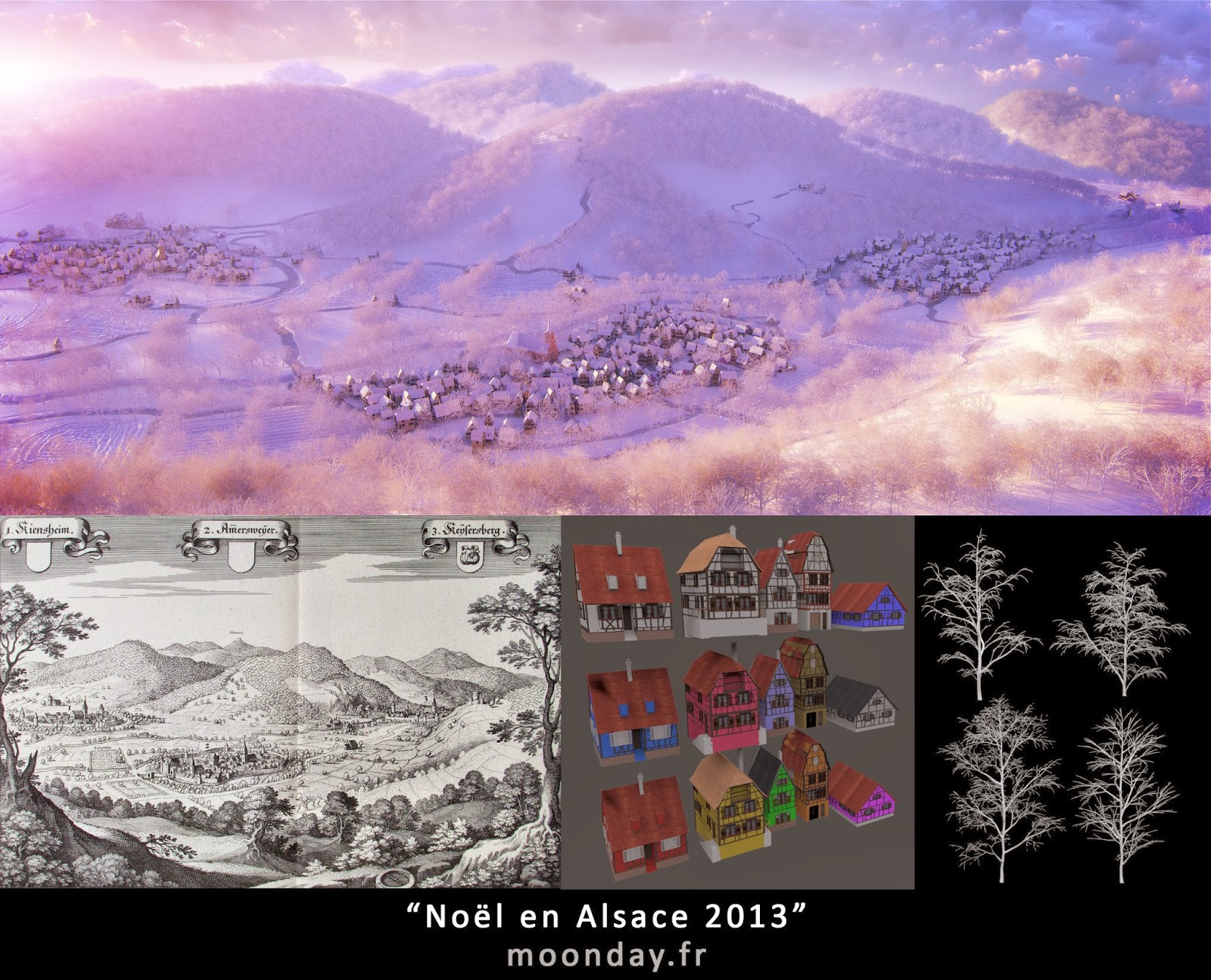 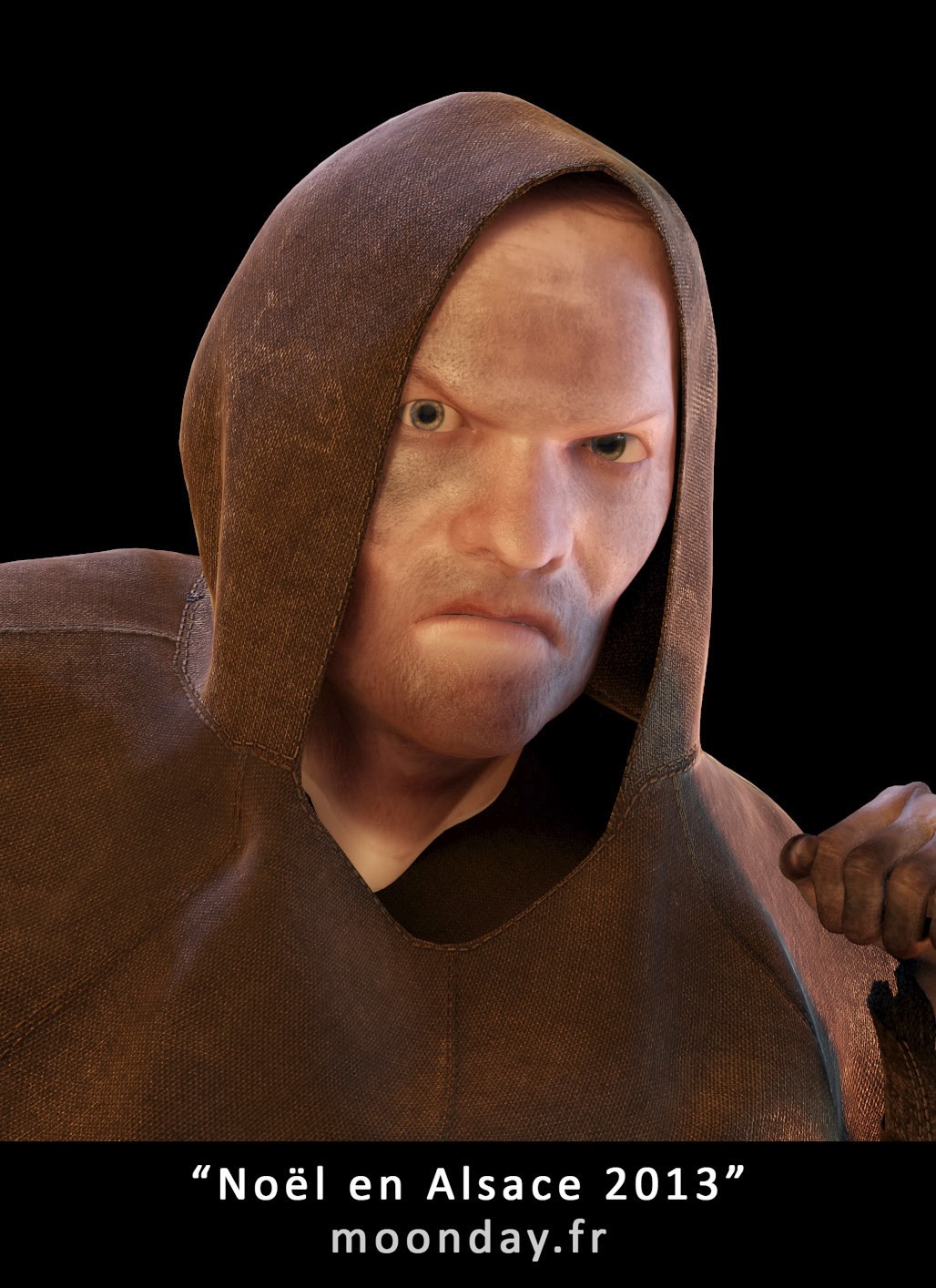 Yoru in the window – “Schnitzel Strasse” on the sign

At last, here is one of the movie previz: